Ted Schilowitz, the man who has a card on which is written “leader of the rebellion” I was given a new interview to talk about news from the next door RED DIGITAL CINEMA, the video is in English, I have no time to do the subtitles right away but that will come later

Today last day of NAB, it goes by super fast, we have no time to do anything next year we will try to make a person more fitting to you because it is impossible and frustrating like that despite the presence of super Loïc who supports me in all respects and that .

NAB 2011, forecasting and the desires of Madame Irma

Panasonic Lumix GH2, it is terrible ! 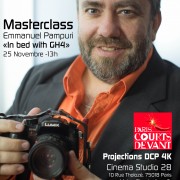